Back by popular demand, another ramen class! Learn to make noodles, stock and some toppings in this hands on class. 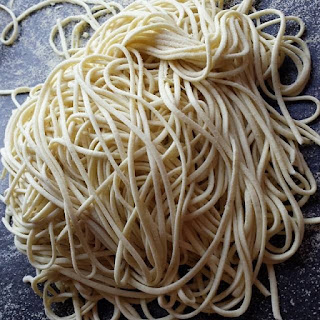 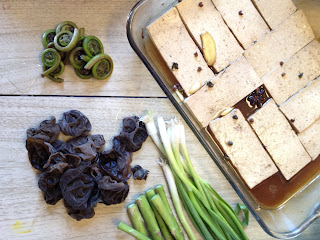 Explore some of the delightful flavors of Southeast Asia in this hands on cooking class.

We will be creating the following dishes:

Been getting lots of requests for this over the years and finally i will teach a vegan ice cream class. Learn how to make amazing creamy desserts from nuts!

We will be creating ice cream from coconut and from cashew as well as homemade waffle cones and toppings.

Flavors for this evening will be:
Chocolate banana (coconut based)
Strawberry (cashew based)

Jamaican Ital foods are the star of this class. One of my personal favorite cuisines. As always, hands on, so you will be making all the dishes with the 5 others in attendance.

We will be making the following dishes:

Jamaican patties; A wonderful dough filled with spicy cabbage, carrots and cauliflower.
Calaloo: Mustards, collards and other greens stewed with taro and coconut milk
Jerk Tempeh
Turned Cornmeal (Jamaica's version of polenta)
Posted by Sound & Savor at 8:06 AM No comments:

Just added a very late addition to my dinner/concert calendar for this coming Monday, February 22. Shing02 is a huge name in the music scene in Japan, an old friend of mine and i have appeared on several of his recordings. He plays for thousands in Japan and will perform for a small audience of 20 diner/listeners on Monday in a loft in West Oakland! It is hard to put him or his music in a box. He was born in Japan but mostly grew up in Tanzania and England and has lives in the bay area, NYC, LA and elsewhere. His music is influenced by hip hop, jazz, Japanese traditional music, electronic music and rock. Very unique and fascinating songwriter, composer and performer!
Menu will be:
salad
shaved asparagus, white bean, cashew feta cheese, pine nut salad
second
cumin peppercorn crusted seitan, maple smoked tempeh, cashew herb cheese balls, yuzu beer mustard, Anadama bread. pickled red onions and capers
third
potato gnocchi baked with with basil pesto, almond ricotta and mushrooms. roasted brocillini.
dessert
our homemade waffle cones with our renowmed ice creams
tonights flavors will be:
orange cardamom chocolate ice cream (coconut based)
pistachio matcha with dried cherries (cashew based)
Sign up on feastly at http://fst.im/s/271b7e01?rf=fwebcmktshrecopy
Posted by Sound & Savor at 5:45 PM 1 comment:

Flavors of Jamaica! Ital cuisine, the vegan food of the rastafarians, one of the most colorful and flavorful of the globe's vegetarian tradittions!
Friday, February 5, 2016
7 pm
limited space for 20
$40/person

for more information and to register, please follow the link:
http://fst.im/s/b46d7e62?rf=fwebcmktshrecopy

Second
Jamaican pattie: A turmeric spiced dough filled with curried cabbage, carrots and peas, served with tamarind sauce and a side of cho-cho apple salad

We will learn to make homemade ramen noodles, some delightful mushroom/seaweed based broth and some very interesting toppings made from tofu, mushrooms, green vegetables and root vegetables.

Saturday and Sunday, February 27 and 28, 2016 (same class being offered 2 different days due to the demand)
noon
limited space for 6
$60/person
for more information or to register: vegshaku8 at gmail.com
Posted by Sound & Savor at 10:05 AM 6 comments: