great video of a dinner/concert by Hannah Kaminsky

Please check this out! A wonderful video done by a friend of the recent Lily Storm/Dan Cantrell dinner/concert
http://bittersweetblog.com/2015/12/17/sound-savor/
Posted by Sound & Savor at 7:15 AM 2 comments:

Valentines with cocktails and jazz

This will be a fun romantic evening filled with beautiful food music and drink.

Steve Draper from millennium will be mixing cocktail for the evening!!!!

For more information or to register please contact vegshaku8@gmail.com

Our special musical guests for the evening will be vocalist Tiffany Austin and saxophone player Howard Wiley. Expects some beautiful music from the jazz and blues traditions from these 2 bay area virtuosos. 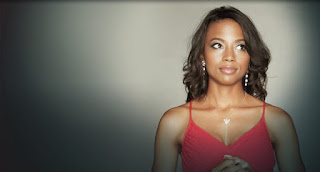 Saturday, January 23, 2016
7 pm
limited space for 20
$60/person
for more information or to register, vegshaku8 at gmail dot com
Jewlia Eisenberg and Charming Hostess join us for an evening of Jewish music about food and sex. And yes, a Jewish inspired menu will be presented. More details, soon. 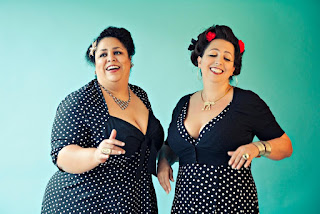 Tonight, Charming Hostess will be singing Sephardi women's music, Andaluzi piyutim, and Marian hymns. We are looking at expressions of abundance in these forms--sometimes food, sometimes drink, sometimes spirit. This intimate iteration of ChoHo is Jewlia Eisenberg and Cynthia Taylor, mostly a cappella. Show some love to the radical women in your life, this is a great date!

Charming Hostess makes music at the intersection of voice, text and diaspora consciousness. You can buy their music (do you still buy music? YAY!)  on the Tzadik label's Radical Jewish Culture imprint. Recordings include The Bowls Project on Babylonian amulets and Trilectic on the political-erotic world of Walter Benjamin. Their work has been curated into the Contemporary Jewish Museum in SF and the Museum of Peace in Uzbekistan; they perform regularly in Europe and the Americas, they have been visiting artists at MIT, CalArts and UColorado. They are currently at work on Queer Piyut, on gender diverse expression Jewish devotional music, and The Ginzburg Geography, a cartographic performance installation based on the lives of Natalia and Leone Ginzburg. The New Yorker describes Jewlia's music as "hilarious and touching, sweet and soulful."  The Wire says we show a "dazzling display of vocal agility, wit, emotional flexibility, and imaginative depth." For the latest:  http://www.charminghostess.com/ 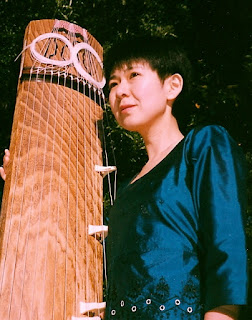 Sunday, January 31, 2016
7 pm
limited space for 20
$60/person
for more information or to make reservations, vegshaku8@gmail.com
Quite excited to have my old friend, Shoko Hikage return to the series. One of the finest koto players living in North America, Shoko is also in the food industry. Her husband is a sushi chef and they own Amasia Sushi in the Castro in San Francisco!
She will be playing new music for koto including a piece by Hyo Shin Na, "Five Pieces on Poems by Hikage Yoshie".
Shoko Hikage began playing koto at the age of three. Her first teacher was Chizuga Kimura of the Ikuta-ryu Sokyoku Seigen Kai in Akita Prefecture, Japan. From 1985, she received special training from the IEMOTO Seiga Adachi. In 1988, Hikage graduated from Takasaki College with a major in koto music. She was then accepted as a special research student (uchideshi) in Sawai Sokyoku In under Tadao and Kazue Sawai, where she received her master's certificate (kyoshi). Hikage also completed a one-year intensive seminar at the Sawai Sokyoku In. In 1992, she moved to Honolulu, Hawaii to teach koto at the Sawai Koto Kai Hawaii (Sawai Koto Institute Hawaii branch) and at the University of Hawaii. In 1997, she moved to San Francisco where she continues her performing activities. Hikage premiered Hyo-shin Na's “Crazy Horse" for Korean Traditional Orchestra and Koto Solo with the National Orchestra of Traditional Instruments in Seoul, Korea in November, 2011. In the Bay Area, she has presented the first performances of several works of Hyo-shi Na, Eunjoo Oh and Walter Zimmermann.
Menu
Soup
5 types of dal with ginger and lotus root/kabocha pakora
Salad
caramelized leeks, roasted gold beets, blood oranges, toasted pecans, mizuna with pecan orange dressing.
Entree
Yellow Curry with Tofu, Kabocha, Satsuma imo, sato-imo.
Jade Pearl Bamboo rice.
Daikon pickles
tokyo turnip pickles
dessert
Homemade waffle cones filled with matcha pistacho ice cream and oolong vanilla ice cream (cashew based), orange mirin sauce
Posted by Sound & Savor at 7:14 AM 2 comments:

Wednesday, January 27, 2016
7 pm
limited space for 6
$60/person
for more information or to register, vegshaku8 at gmail dot com
A hands on class exploring some wonderful flavors from Chinese cuisines!
The menu we will be creating:
Orange sauce Tofu
Gai Lan (chinese brocolli) with black bean sauce
Tofu and Watercress Soup
Vegetarian Chow Fun
Posted by Sound & Savor at 7:06 AM No comments:

Sunday, January 10, 2016
noon
limited space for 6
$60/person
for more information or to register, vegshaku8 at gmail dot com
Hands on cooking class exploring to learn how to bake bagels. We will be mixing, kneading, shaping, boiling and baking some truly delightful fresh bagels, unlike anything you can find in shops in the bay area!
And what is a bagel without a good schmear? So we will also be learning how to make our own cashew cream cheese in this class!
photo from last years bagel class, taken by Rebecca Martinez 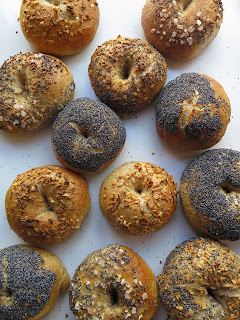 Hands on cooking class exploring some of the wonderful cuisine of Thailand. We will be pounding out curry pastes, stir frying, deep frying, sauteeing, steaming to develop several tasty dishes.

The menu we will prepare is:
Thai Jungle curry paste (a very hot spicy curry!)
Jungle curry with pumpkin and tempeh
Stir fried Choy sum with garlic and ginger
Hot and Sour Soup with bean thread and mushrooms
Stir fried Rice noodles with sprouts
Posted by Sound & Savor at 6:46 AM No comments: